Recently we have set up hotspots in 2 campgrounds. Both of them were quite large, one of them already had the equipment (Linksys WRT54GLs, Ubiquiti APs mostly), the other one had no equipment so we could buy anything we wanted (with a restricted budget of course).

Here’s how we solved the installation in the 1st campsite.

In previous years, the installation was not ideal, as there were lots of routers and APs running as a hotspot, so there were lots of small networks, lots of SSIDs and people needed to connect to a different SSID again and again and log in each time if they moved around the camp.

First we’ve created a plan based on the map we had, the spots where we could get electricity and install hardware, considering the existing hardware we had. It turned out that we had 5 ADSL lines, 3 of them was installed at the reception, two other ones were in different part of the campground (very far from the reception). We could have a planed to join all the lines, but in this case we would have to buy more hardware. So we have decided to create a large network from the 3 ADLS at the reception, then two small ones from the other 2 ADSL lines. 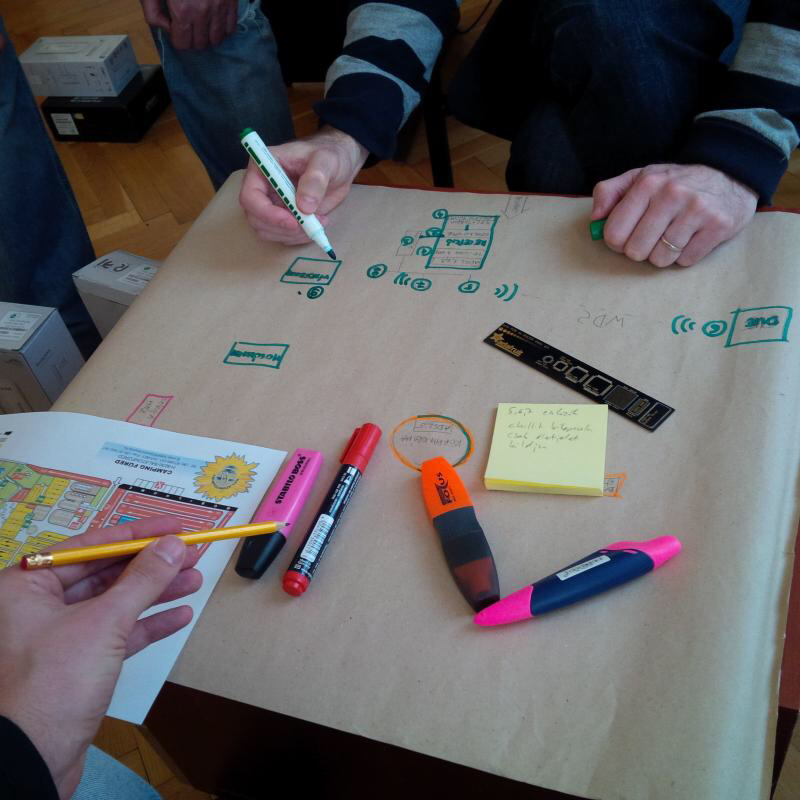 Planning a Wi-Fi Hotspot in a campground

It took a few hours to figure it all out, we have numbered all the devices and made all the setup in the office before we moved all to the site.

On the software side, we have decided to use a hotspot gateway to create a large network with lots of APs. We chose Ubiquiti’s new device, the Edgerouter (Lite). It’s a linux based box which is “the world’s first economical router capable of routing up to 1 million packets per second.” – Ubiquiti claims. Our tests showed that it was quite fast. The Edgerouter is a Debian based system, where we have managed to install coovachilli and the hotspot was running smooth and stable.

You can find our guide about how to setup a hotspot on EdgeRouter.

We have also managed to setup different hotspot locations to different LAN ports, which is a quite unique ability (we will make a separated post later about this). We needed this because we also installed desktop PCs for people without a laptop or smartphone, and we only wanted to sell 30 minute packages there, so a different splash page was needed (and we have created a location for the Wi-Fi and one for the PCs).

On the APs, we installed our hotspot firmware where it was possible (newer version cannot be upgraded with a 3rd party firmware). This was because it had an option to send a life signal to the control center even with hotspot turned off. That way we can see in the Control Center whether the individual APs are running.

Here is how it was done

We have used a TP-Link TL-R480T+ load balance router to combine the 3 ADSL lines together. It is very important to set a rule for https traffic to go over only on one line, otherwise https sites (banking sites, or any securely protected sites which need a login and password) will force you to re-login in every minute or so which makes it impossible to use for hotspot users. It’s called Flow Control in TP-Link’s software.

On the right side of the picture you can see the Edgerouter, the uplink is coming from the load balance router, one LAN port goes into a switch which powers the access points, and the other port goes to an other switch (not seen in the picture as it was in an other room) to provide the splash page for the desktop PCs. 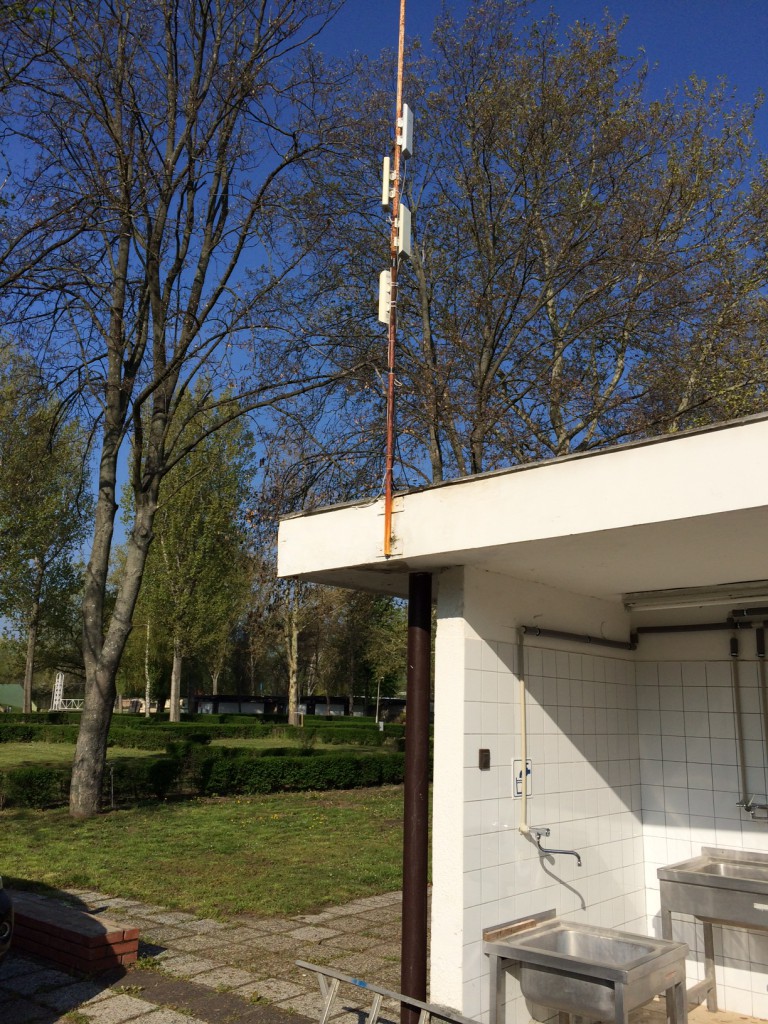 The first access points got the hotspot internet connection from the Edgerouter. We have used 2,4GHz Nanostation M2 for that purpose which was connected to an other AP via WDS. We have also used 5GHz Nanostation M2 to provide a 5 GHz uplink for other APs. In the picture you can see this (there are additional Ubiquiti APs which were there because of the campground’s internal surveilling camera system. 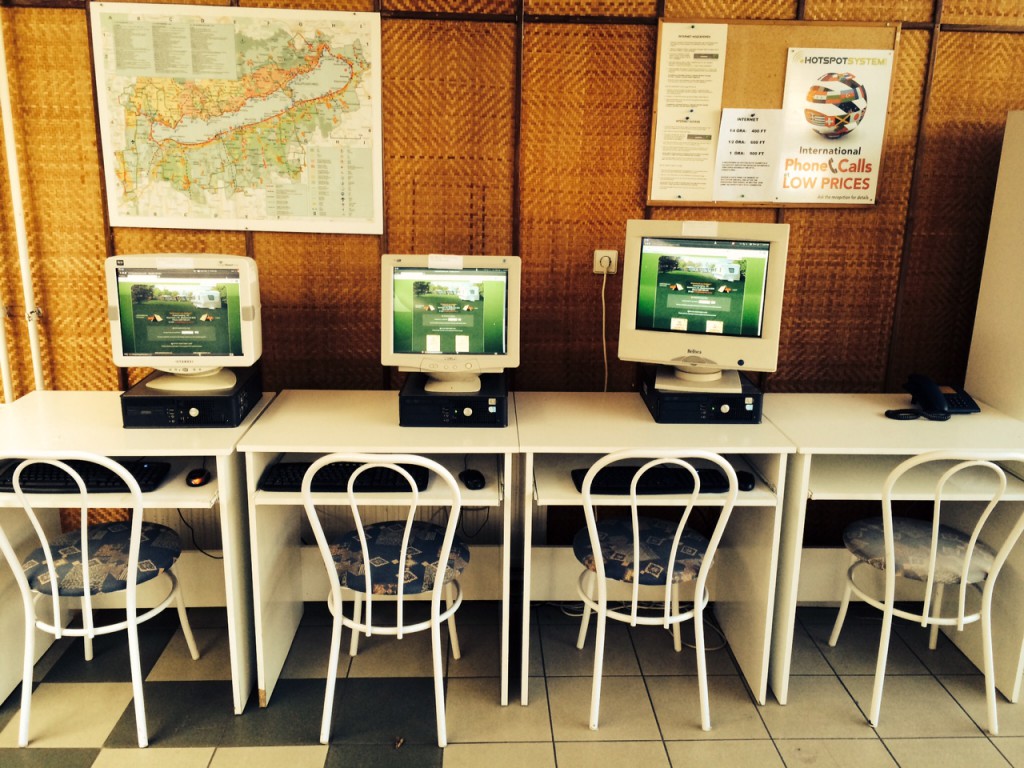 In the PC room we have used Ubuntu OS which is more than enough for the most basic tasks that the guests will do, like browsing or use Skype. Additionally we have also set up a stand alone phone which can be used for cheap long distance calls from the campground, if someone has no internet connection (or doesn’t know how to make an internet call). This was also done by our calling card software which makes easy for the campsite to sell cheap calling cards and also make profits on the calls. The phone itself got the internet from the same switch as the desktop PCs (going through the splash page), but as the phone’s software is running from the same servers as hotspotsystem, calls are going through the internet without having to set anything manually.

The campground also wanted to operate a free internet spot in a small place, where anyone can use the internet for free, however the speed has to be limited and only 300 MB is allowed for each device. The service could be easily provided by our Hotspot Free Basic Plus+ service. After a device used up all the allowed traffic, the access was blocked to the free site, allowing other people to effectively use the free service.

As the whole campground network received a pay per use internet connection through the Edgerouter, we needed to add the mac address of a Linksys WRT54GL (which we used to provide the free hotspot service) to the Edgerouter’s coovachilli config. We have used DD-WRT build 22118 on WRT54GL and this router was the only stand-alone router which was operated as a hotspot.

Having one large network with one SSID should always be a goal when you set up a large site. Also, it’s much easier to set up one hotspot device, acting as a gateway which provides the hotspot connection for all the access points. You can use any hardware for that purpose but you have to be sure that it is powerful enough to handle all hotspot users. A low-cost, $100 router would stop after 10-20 simultaneous connections.

It’s also important to avoid guests having to re-login often. What you need to do about this is to increase the DHCP lease and increase the Idle-Timeout.

It took about a day and a half to cover the campground completely. We’ll see how it will work out once the guests arrive for the summer 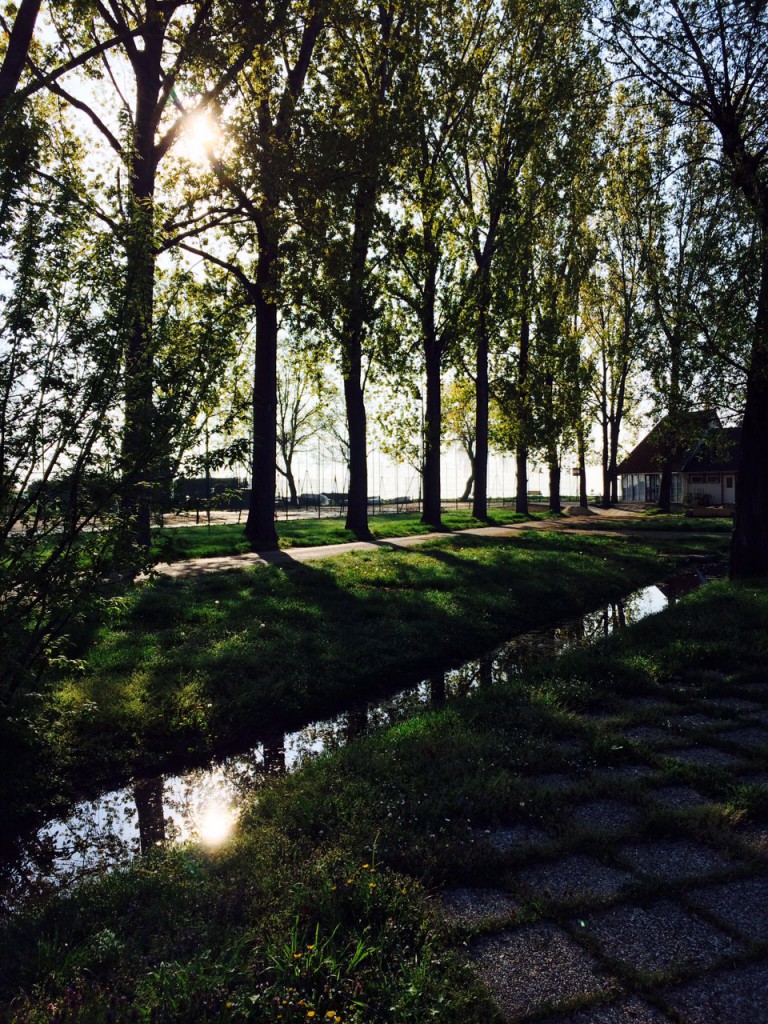 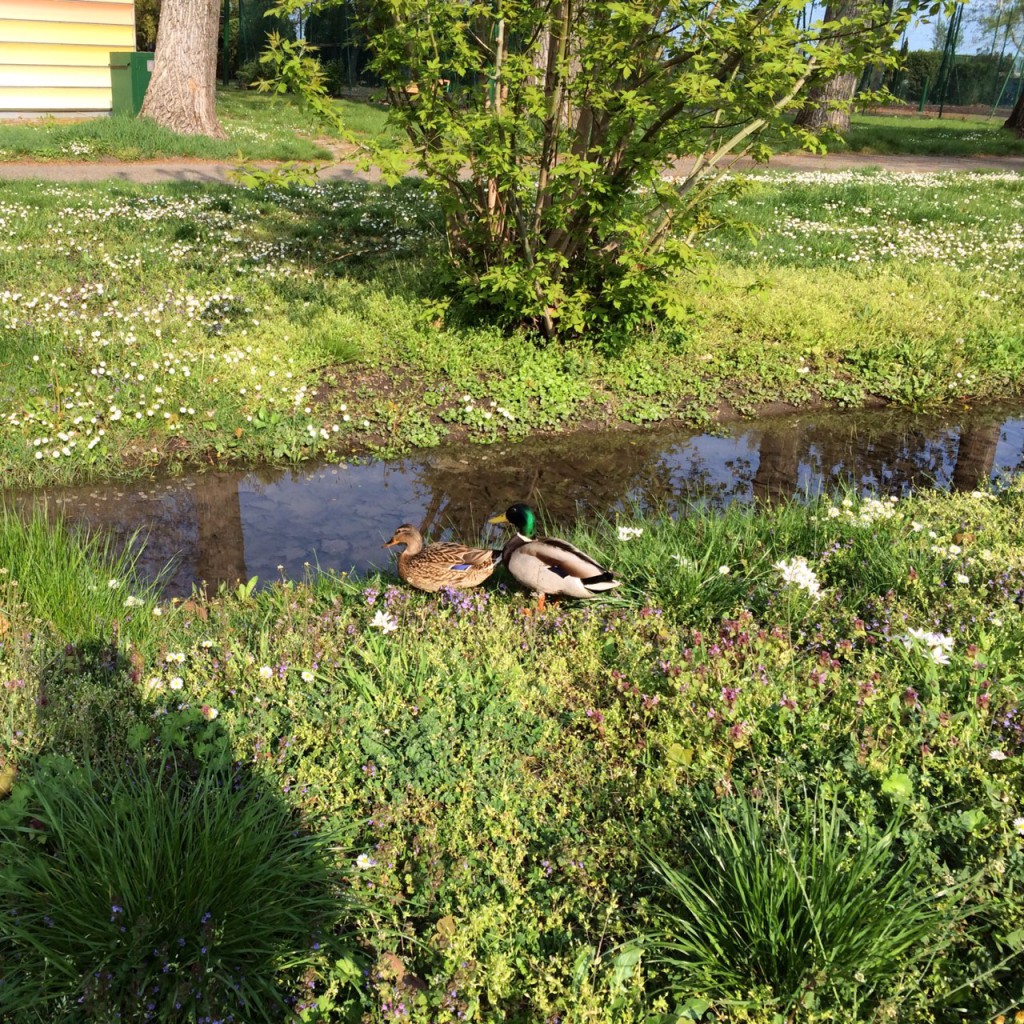 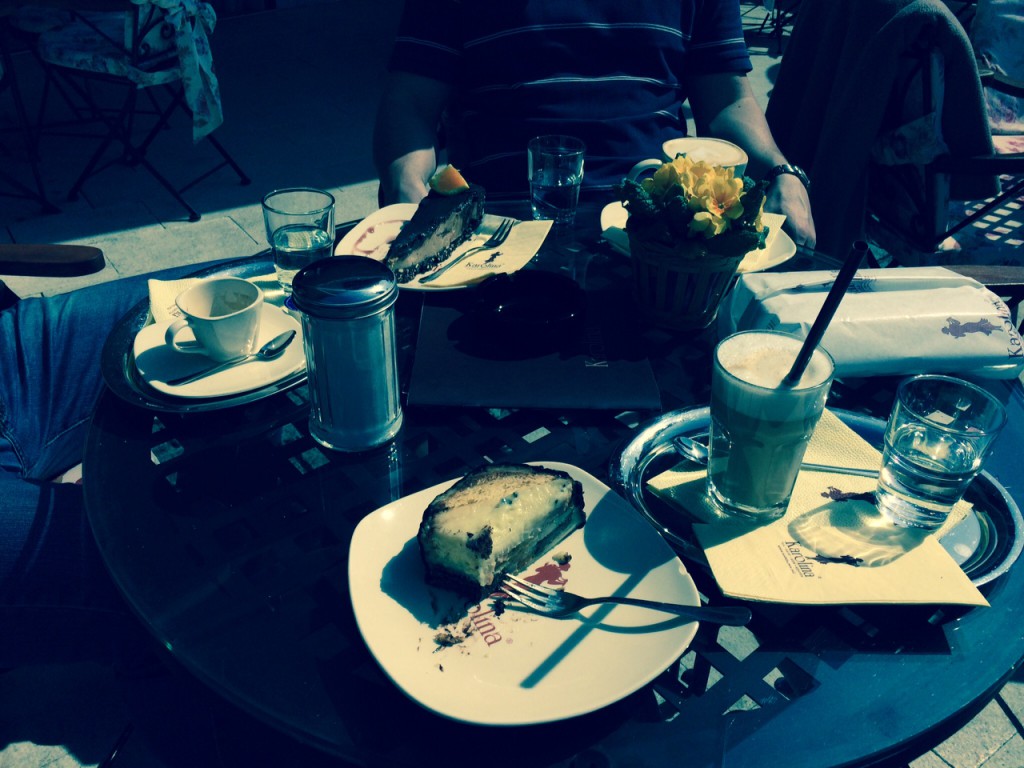 Here you can read how we solved the installation in the 2nd campground.